FCAU (Fiat Chrysler Automobiles) appears to be attracting attention recently, with the stock up ~27% over the last 3 months vs. S&P 500 index up ~3%. Starting with FCAU’s valuation discount, I try to interpret investment risks for the stock. 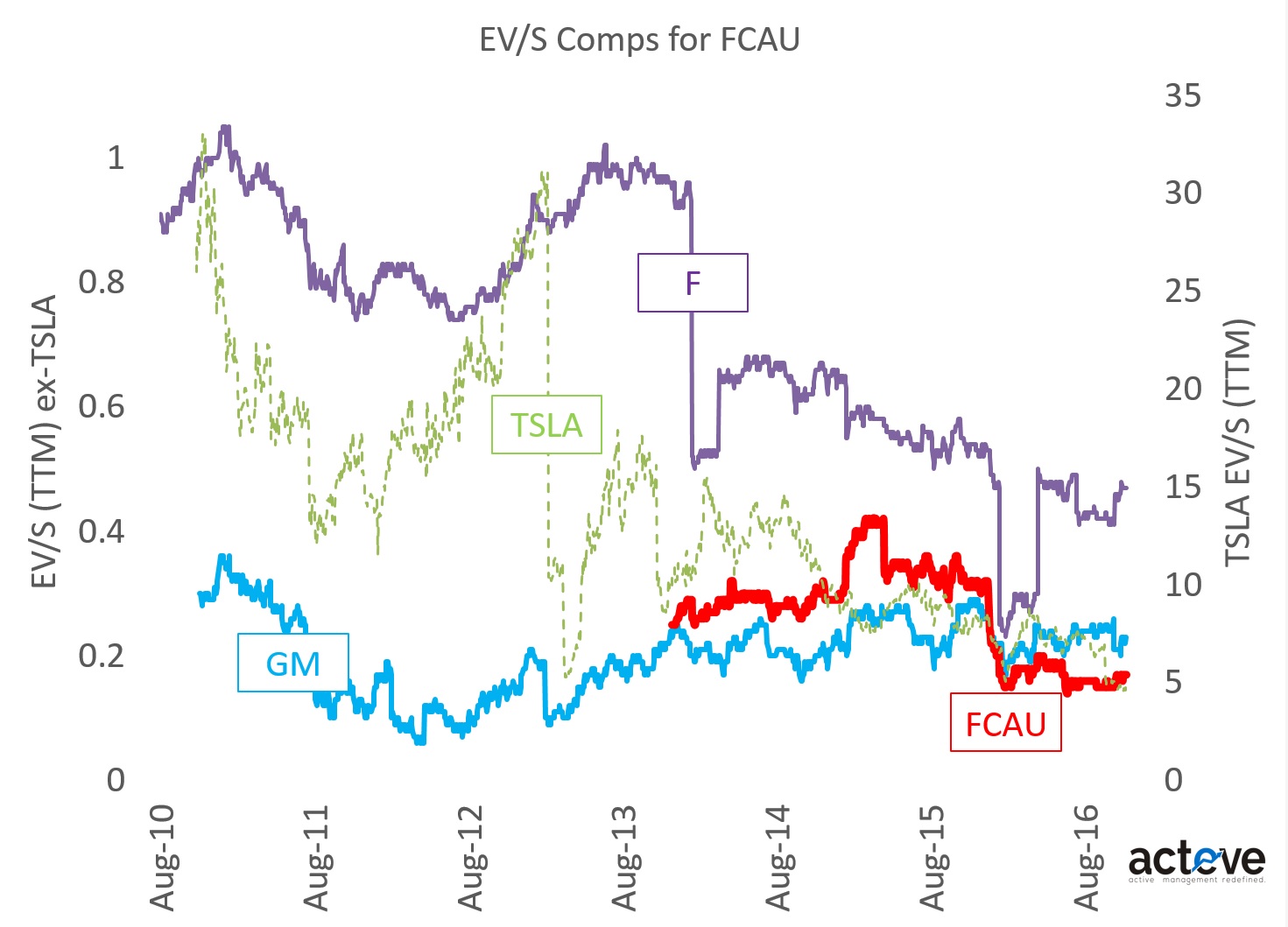 My interpretation of the investment thesis for FCAU is:
1. Business restructuring and turnaround by capable CEO.
2. Normalization of (severe) valuation discount.

CEO Marchionne is credited with the turnaround of Fiat prior to Fiat’s merger with Chrysler in 2014, and FCAU bulls believe he can successfully turn FCAU into a performing asset/stock consistent with 2018 model targets presented at an analyst meeting in 2014. This in turn should help FCAU’s valuation catch up to peers F and GM, and/or move higher as a group.

Such an anticipated turnaround might include one or more of the following positive developments:
1. Jeep ramp and multi-fold market expansion in China, helped by local production.
2. Multiple product refreshes of ageing products to improve economics and stimulate demand with lower incentives.
3. Restructuring and/or disposal of components businesses.

NAFTA disruption is a well-known risk which some investors have tried to quantify, but actual impact will not be known until the new president-elect takes office next year. Share loss in electric car and/or self-driving car would impact both auto sales as well as components businesses. However, neither of these potential share losses are likely to be material through the 2018 timeframe that the company is targeting for delivery of model improvements. Management believes that business conditions in Brazil have nearly stabilized, and hopes for gradual improvement from here. There is also a school of thought that a rising U.S. Dollar might be advantageous to FCAU, while subprime auto loans and gradually rising default rates would continue to incrementally increase concern.

Comparing YoY revenue growth across the peer group suggests that some of FCAU’s valuation discount is explained by muted revenue growth. In comparison, one thing that Tesla has delivered is revenue growth, at the expense of traditional auto companies. As new ideas and competition around highly fuel-efficient engines, hybrid or electric powertrain, and self-driving capabilities catch on, the secular industry landscape appears far from favorable. Another perspective however, is that revolutionary changes in automobile capabilities and efficiency might drive a massive consumer and business refresh cycle. 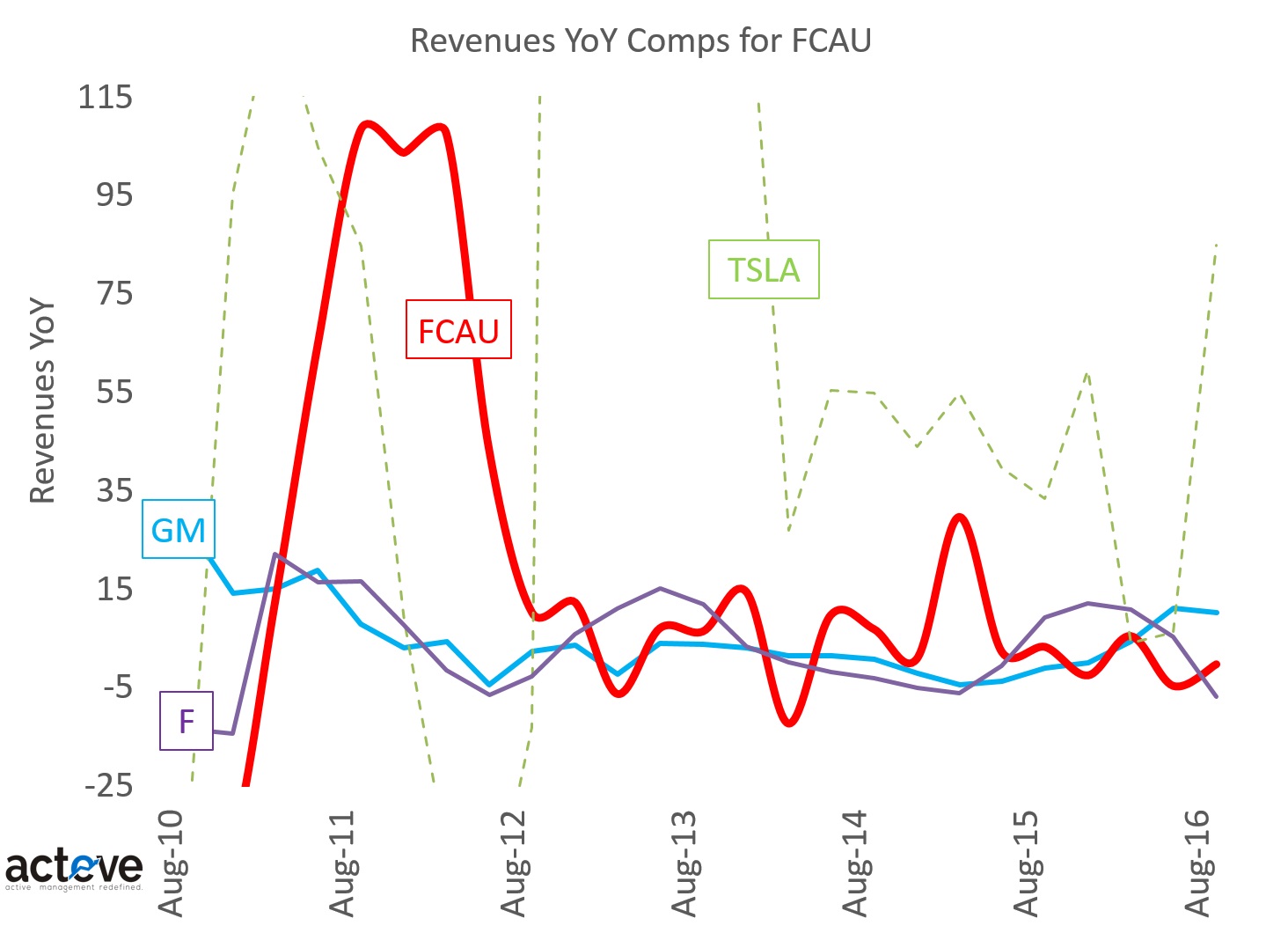 While FCAU’s gross margins are roughly comparable to those of F and GM, they are significantly below TSLA’s. This underscores the commodity nature of traditional auto, a core element that is unlikely to change through 2018, though FCAU’s product mix could turn richer with a model refresh and potential cost reduction through local manufacturing in China. 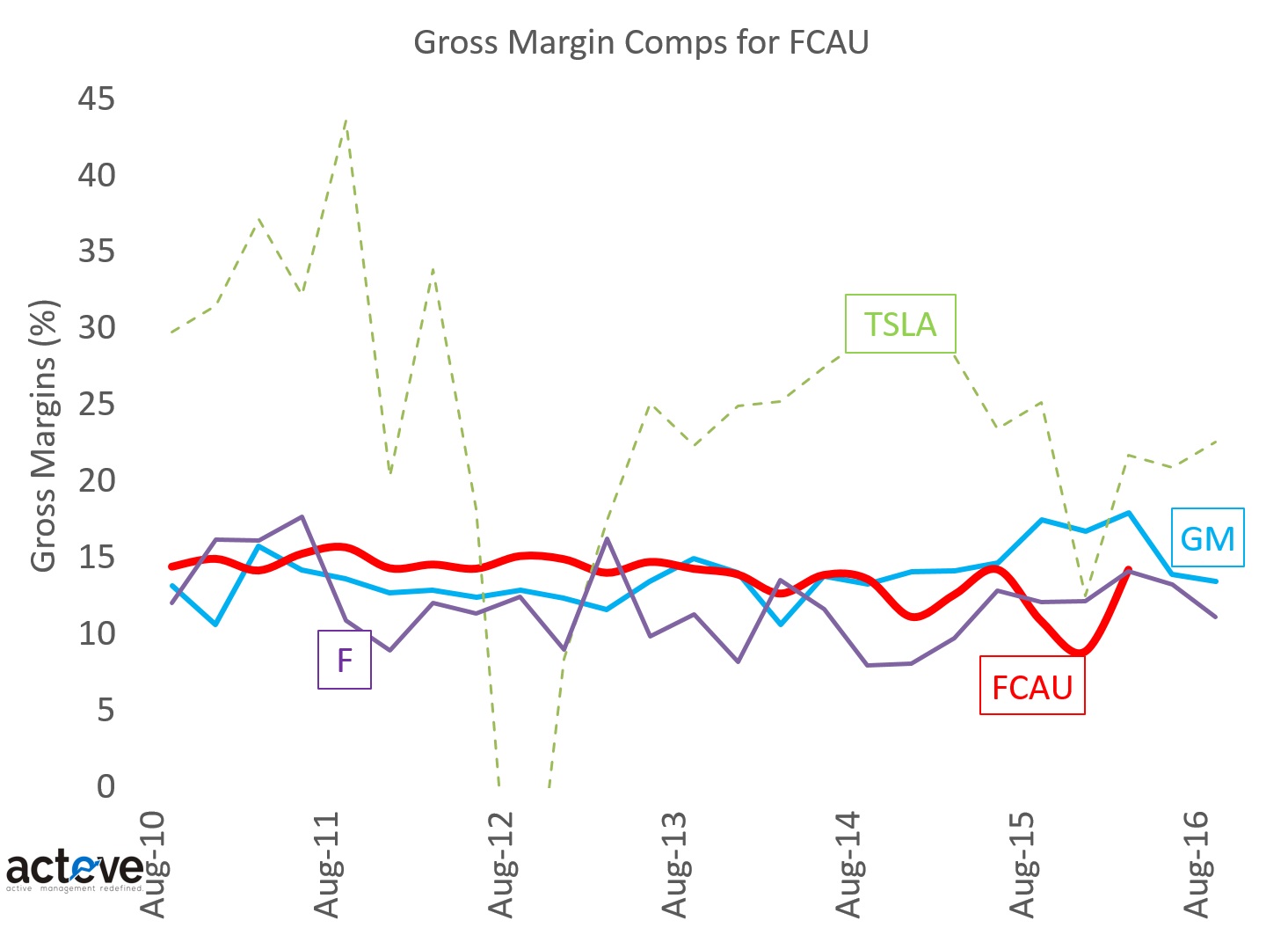 A comparison of Operating Margins (OPM) suggests FCAU is ~middle-of-the-pack relative to F and GM, and more stable compared to TSLA which hasn’t really been profitable on an OPM basis for much of its history. 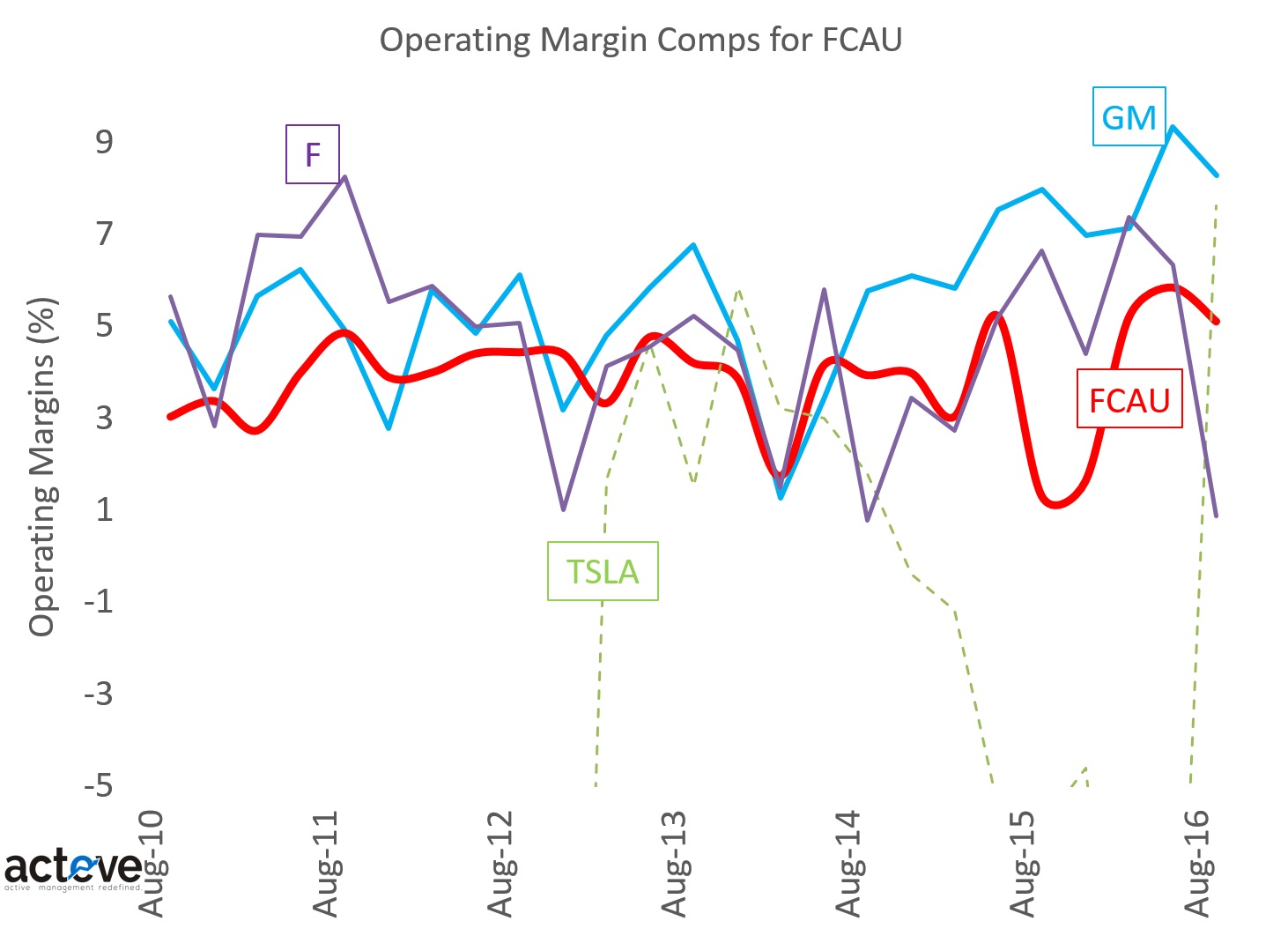 For what it’s worth, the company appears to be executing well on its 2018 plan under Marchionne’s capable leadership. Top investors include superinvestor Mohnish Pabrai (~26% position reported in Dalal Street portfolio) among other value investors. Within the broader Technology space, EV/S valuations of ~1x or lower are considered a deep discount. FCAU trades at EV/S of 0.2x. Given such a mixed bag of company fundamentals against a highly cyclical industry backdrop, does FCAU stock provide adequate margin of safety at its current valuation? Is the stock as risky as fundamentals are uncertain?


Author: Sundeep Bajikar
THIS ARTICLE IS NOT AN EQUITY RESEARCH REPORT.
Disclosure: As of this writing the acteve Model Portfolio (aMP) did not hold any positions in FCAU, F, GM or TSLA.
Additional Disclosures and Disclaimer
Stock market data provided by Sentieo.